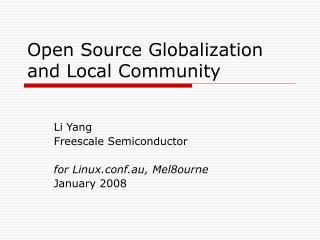 Open Source Globalization and Local Community. Li Yang Freescale Semiconductor for Linux.conf.au, Mel8ourne January 2008. Agenda . Why is globalization important What obstacles are we facing What can we do about it How can local community help What are we doing in China. Agenda. The Religion in Globalization - . legitimacy, natural law and empire. globalization: what is it?. universal exchange or

MySQL - . would you like some transactions with that table?. slides are available. what is mysql?. most popular open

Globalization - . foldable. label in this order: culture technology health/environment economy what is globalization?.

An Introduction to the Asterisk Open Source PBX - . presented by: gregory boehnlein vice president of n2net, a new age