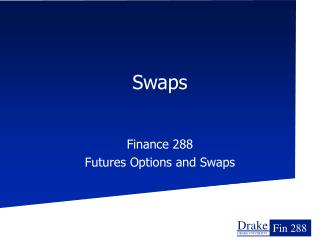 Swaps. Finance 288 Futures Options and Swaps. Introduction. An agreement between two parties to exchange cash flows in the future. The agreement specifies the dates that the cash flows are to be paid and the way that they are to be calculated.

Interest Rates and Swaps - . term structure analysis. term-structure. it refers to the relationships of ytm of default

OTC Derivatives - – product history and regulation. otc derivatives. september 2009. introduction. what is a

Options and Futures - . finansiell ekonomi 723g28 linköpings university. what is a derivative?. a derivative is an

OTC Derivatives - – product history and regulation. otc derivatives. september 2009. introduction. what is a