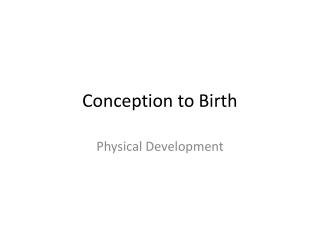 Conception to Birth - . conception. in order to become pregnant an egg must be fertilised by sperm. when sperm is

From Conception to Birth - . objective: tswat analyze the factors involved in the processes of fetal development,

Development From Conception To Birth - . conception occurs when a sperm and an ovum unite. a zygote (0-14 days) is

CHAPTER 3 CONCEPTION, PRENATAL DEVELOPMENT, AND BIRTH - . in this chapter. what happens during the first nine months of

How Does Birth Control Impact Ovulation And Conception? - For women who try birth control to prevent pregnancy, the end

The Miracle of Me from conception to birth by Amy Pedersen - . media kit.

“Conception to Consumption” - . objectives. map the stages of animal growth and development as it relates to market

Conception - . the ovum is the size of a grain of salt. 40 – 150 million sperm are released only one will fertilize the

Conception - . the process of becoming pregnant involving fertilization or implantation or both. the reproductive

Conception - . who we are. we are a school for all pupils. 600 pupils are educated in 26 classes. every child can learn

From Conception to Commercialization