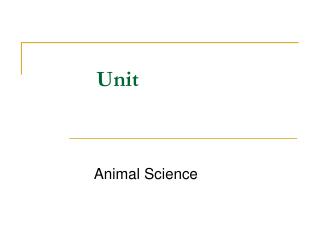 Unit. Animal Science. Problem Area. Growth and Development of Animals. Lesson. Growth Hormones in Animals. Student Learning Objectives. 1. Understand the effects that bovine somatotropin has on the cow. 2. Understand the arguments for and against the use of growth hormone in cows. Control Unit CPU Logic Unit Arithmetic Unit - . how these components talk to each other? control lines and instruction

Unit Presentation – Speak Unit - . gionni skupaka. the book. speak is a book about a young girl, melinda sordino , who

Unit 3 Unit 4 - A1. unit 3 unit 4. present perfect simple. past, completed action with a result in present i have already

UNIT - . surface processes. 8. the action of glaciers. biology and geology 3. secondary education. unit. as it