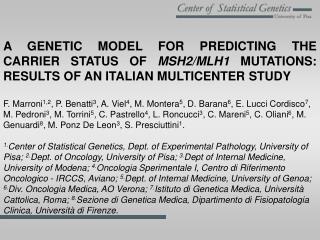 A GENETIC MODEL FOR PREDICTING THE CARRIER STATUS OF MSH2/MLH1 MUTATIONS: RESULTS OF AN ITALIAN MULTICENTER STUDY DNA: The Carrier of Genetic Information - . ap biology. how was dna discovered to be the chemical unit of heredity?.

T1 Carrier System - . engr 475 – telecommunications harding university jonathan white. outline. aka what it is and what

Chemical Reactions: Predicting Products and Balancing - . this powerpoint presentation will be far more effective if you

The Category Approach for Predicting Mutagenicity and Carcinogenicity - . laboratory of mathematical chemistry,

Chromosomal mutations - . a mutation is a change in the dna generally, mutations are considered at the gene level, but

Chromosomal Mutations &amp; their effects - . karyotype. a picture of the chromosomes of an individual or a species,

MUTATIONS! - . scott hatfield bullard science department. part one. mutations, part 1: what are they ?. mutations:. are

RETIREMENT and INCOME MODELLING UNIT: TREASURY Predicting the Unpredictable - Foresighting in the aps - from forecasts,