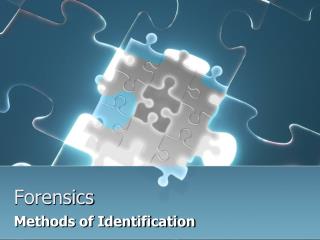 Forensics . Methods of Identification. Why is forensics important? . What is Forensic Science? . Forensic science is the application of scientific techniques to investigate a crime. Forensic scientists collect and analyze evidence from a crime scene. Forensics - . by dipa salim. fingerprinting. can identify a suspect helps you track down a person is a part of forensics.

FORENSICS - . turning to crime. let’s revise the factors that might turn this. ......to this. kohlberg (moral

Forensics - . chapter seven: drugs. drugs. a natural or synthetic substance that is used to produce physiological or

Forensics - . take careful notes on any questions you miss. identify the the fingerprint type. answer: whorl.

Forensics - . lin wozniewski lwoz@iun.edu. disclaimer. this presentation was prepared using draft rules. there may be

FORENSICS - . relating to or used in legal proceedings or argumentation. what does “forensic” mean?. comes from latin

Forensics - . activity 2. what can we tell by examining a person?. skin color? eye color? hair color? boy or girl? tall

Forensics - . serology day 8. this week in forensics. tuesday- blood spatter thursday- test on serology you should have

Forensics - . activity 1. what you need to get started:. you will need to gather the following materials to begin: 3x5