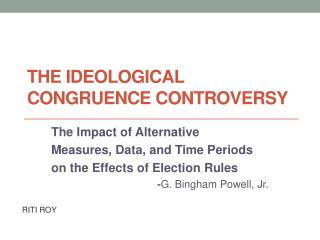 The Controversy - . basic temperature and co 2 data are not in dispute controversy focuses on whether or not warming

Congruence - . 5-6. pre-algebra. warm up. find the measure of the indicated angle. 1 . the fourth angle in a

CONGRUENCE - . ․ let m be an integer greater than 1. if x and y are integers, we say that x is congruent to y modulo m

Congruence - . figures that have the same shape and size are said to be congruent . for example,. congruent triangles.

The Dividend Controversy - . should firms pay high dividends?. trap question one:. an investor buys a share. it never