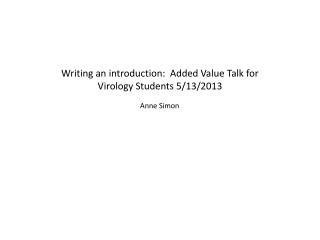 Writing an introduction: Added Value Talk for Virology Students 5/13/2013. Anne Simon. Introduction Regulation of gene expression is an essential cellular process that occurs at multiple levels including translation of mRNAs into proteins. Latest trends in wireless technology - This is my first talk to the staffs and postgraduate students of fkee, uthm during

Chapter 5 Improving your writing: grammar and self-editing - . learning objectives. on completion of this chapter

Talk for Writing Across the Curriculum

Welcome to an Introduction to Writing Argument - . take a stand. would you rather have the voice of gilbert godffried or

Writing Workshop - . headlines. “ local high school dropouts cut in half”. introduction. “writing is easy. all you

Introduction to Topic-Based Writing - . ncr information engineering. about this presentation. purpose: to provide an

Technical Writing: Real-World Writing in the 21 st Century - Wvde. essential questions:. how does technical writing in

Spivey for the Spirited: Introduction and Action Expanders - . s. hutson. spivey will turn your writing from. this. to