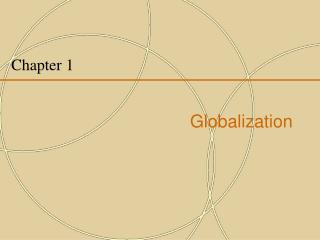 Chapter 1 GLOBALIZATION - . mgt 372 lecture by: ms. adina malik (alk). what is globalization?. it is a process by which

Chapter 1 – Understandings of Globalization - . unit 1 – to what extent should globalization shape identity?.

1) Globalization: - Increasing connectedness, interaction, and interdependency of the world… -

1. Globalization - . the linking of nations through trade , information, technologies, and communication . this often

Unit 1 Globalization - Gl obalization : refers to the dependent and inter-dependent relationships among places on earth,

1 Introduction to Globalization - “this is a very exciting time in the world of information. it's not just that the

Chapter 2 Globalization, Core-Periphery - . 02.01 a minisystem is a society with: 1. a single cultural base 2. a modern

Chapter 5 Globalization and Technology - He et al.. learning objectives. after reading this chapter, you will have a