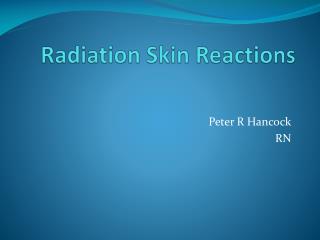 Drug-Induced Skin Reactions - . objectives. the learner will be able to: identify cancer treatments most likely to cause

Radiation - . basics of radiation. energy that comes from a source and travels through material or space. light, heat and

RADIATION - Radiation – radiation is the movement of energized particles or waves. radiation. radiation. what are some