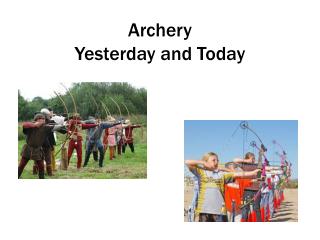 Archery Yesterday and Today. The History and Sport of Archery. Today became GREAT when YOU arrived! - . welcome!. today’s agenda: i can explain the elements of differentiated

NASRUDDIN’S AIM - . by jyothi singh. archery is an art of hitting the target with an arrow. bow . arrow. arrow in the