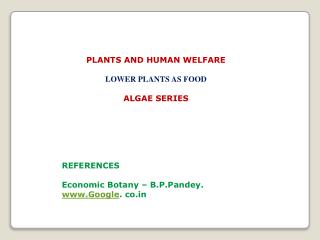 Plants Produce Food - . every organism on earth needs energy to live and grow. the primary source of all life energy on

From Algae to Terrestrial Plants - . by marie, rebecca and filiam. algae. algae is a photosynthetic member of the kingdom

Human Uses of Plants - . vanilla ice cream. kashif and sarah. plant source &amp; what part of the plant is used to