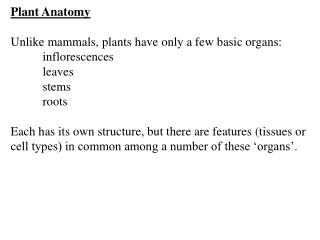 Plant Anatomy Unlike mammals, plants have only a few basic organs: inflorescences leaves stems roots Each has its own structure, but there are features (tissues or cell types) in common among a number of these ‘organs’. VINES … An Underutilized Source of Color and Interest in the Landscape - . alan shapiro grandiflora march 31, 2005.