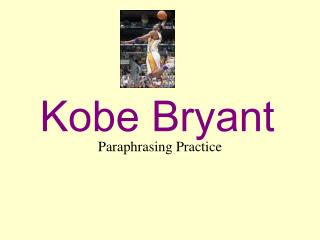 Kobe Bryant. Paraphrasing Practice. Kobe earned his nickname “Jellybean” after some young fans gave him jellybeans following a game. When Kobe was eleven years old, he began to grow taller. Over the course of the next two years he grew more than a foot, to over six feet tall. Kobe Bryant: 1978 - 2020 - Kobe bryant, the transcendent basketball superstar who won five nba championships and was the

Statistics and Facts About Kobe Bryant, the Basketball Player - . brian nguyen 2nd period. box and whisker plot on the

Comparing the Early Careers of Michael Jordan, Kobe Bryant, and Lebron James - . introduction. a good estimate of a

Kobe B ryant - . kobe bryant is one of the best nba players in the league. introduction. f ifth player in nba history to