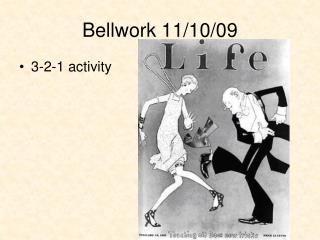 Bellwork 11/10/09. 3-2-1 activity. Assignment. Fold a piece of paper in four squares with following titles (boom cycle, effects of the car industry, electric appliances, and reasons for the post war recession). Include the following in each square. 2 facts, summary, and a picture. Bellwork - . true/false concerning lab safety: if a student drops an alcohol thermometer, they should stop, drop, and

Bellwork Week 09 - . the ozone hole is a completely different phenomenon to global warming ! t here are links between

Bellwork – 09/12/18 - . what type of line should you have on a distance vs. time graph for constantly accelerated

Bellwork Question - . date: 10/19/09 essential question: how did individuals respond to discrimination? what was one of

Bellwork – 09/03/15 - . sketch a graph of position vs. time for when the meter stick was falling in your first lab

Bellwork Week 11 - . bellwork week 11. look up the following prefixes in on your language of science worksheet (pg. 4)

Bellwork 11/16 - . turn to page 53 in your comp book. title the page the counter-reformation. divide the page into

Bellwork Question: - Objective 09/20/12. students will use their powers of observation and inference to solve a crime!.

Bellwork December 11 th : - . many people believe that television violence has a negative effect on society because it