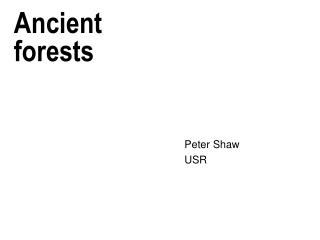 Ancient forests. Peter Shaw USR. Introduction. I hope that you all know, in general outline, that there is a conservation concern around tropical rainforests. In fact this is part of a wider set of concerns around ancient forests globally. Forests - . old growth. forest that has not been disturbed by humans or disaster for 200 years or more russia, canada,

Forests - . by jayden. what is a forest?. there is so much to see in a rain forest, from birds flying though the canopy

Forests - . by ellie-kay thompson &amp; zain ahmed . why do we need to replant forests? . picture of a tree being

Forests - . by: jen roach. resources. some of the resources that are in a forest are flowers, fruits, seeds, and other

Forests - . forest covers 30% of available land. 90% of known species live in forests. 80% of virgin forests have been

Forests - . resource we all need for living. forestry. forest ecosystems have come to be seen as one of the most

Defining Forests - How does the forest promote the interaction of all living organisms?. examine the various trees within

Rain Forests - . rainforests of the world. rainforests cover less than 6% of the land’s surface. they are all near