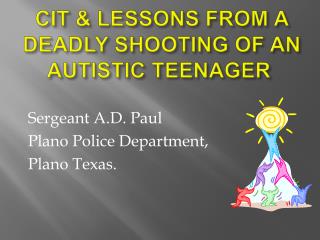 CIT & LESSONS FROM A DEADLY SHOOTING OF AN AUTISTIC TEENAGER CIT & LESSONS FROM A DEADLY SHOOTING OF AN AUTISTIC TEENAGER

Aftermath in Istanbul - The day after the deadly attack on ataturk

Shooting spree in Arizona - A gunman opened fire inside a mesa motel room, before shooting three more as he sought to

Crime - . crime has many faces: the teenager who stole the test, the business person that cheated on his taxes, a father

Hypocrites and Backsliders Lessons -051 and 052 - . armor of god: gap (grace apparatus for perception). the doctrine of

Simple ABAP/4 for trouble shooting - . may 25th, 2004. objectives:. understand and get an idea on what abap/4 programming

Lessons from the Thirtymile Fire - . user note: if you open links within this program, use the following options to

The G.M.O Quiz - By: megan and kelsey (click anywhere on the screen to move to the next slide.) what is deoxyribonucleic