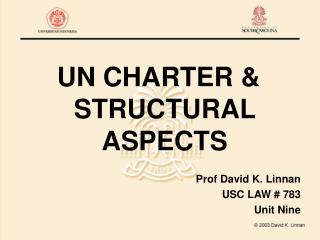 Structural Design - . introduction. it is necessary to evaluate the structural reliability of a proposed design to ensure

Structural Genomics aims in identifying as many new folds as possible. - Macromolecular crystallography and structural

THE CHARTER OF THE UNITED NATIONS - . unit 26. preview. history origins of the charter charter of the un purposes of the