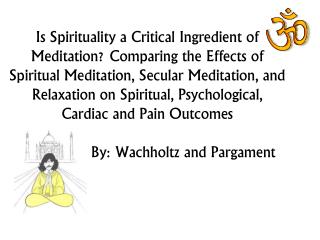 Is Spirituality a Critical Ingredient of Meditation? Comparing the Effects of Spiritual Meditation, Secular Meditation, and Relaxation on Spiritual, Psychological, Cardiac and Pain Outcomes By : Wachholtz and Pargament . POMPEII AND HERCULANEUM : RELIGIOUS PRACTICES - . religion at pompeii and

Islamic Religious Practices - . 5 pillars of islam. the order for living righteously is apparent in the 5 pillars support

New Religious Movements and their appeal - . by the end of this lesson you will have a clear understanding of different

World religious sites - . this assignment is to investigate other religious buildings or sites around the world. it is an

Cultures around the world - . india. how do indians say “yes”?. they nod they wobble they join their hands and nod.

5 Religious Funeral Customs and Their Meanings - To prevent the instances where you may offend someone, here’s a look

Food Customs and Cultures Around the World - . 1. research the internet to find at least 5 different dishes from around