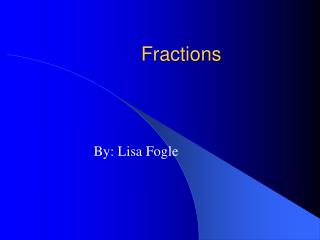 Fractions. By: Lisa Fogle. What are fractions?. They are part of a whole. Comes from the Latin word fractio meaning to break or break apart. Have numerator and a denominator They are written as a over b or a/b, the a is the numerator and b is the denominator. Multiply Fractions by Fractions - . honors math – grade 5. problem of the day. one third of a swimming pool is roped

Fractions VI Simplifying Fractions - . mr. jerolaman. factor. a number that divides evenly into another. factors of 24

FRACTIONS - . vocabulary. fraction - a number that describes part of a whole or part of a set. numerator - top number of

Fractions - . an interactive activity introducing quarters. first we will slice it into 2 equal sized pieces. click on

Fractions - . with visual arts integration. the top number in the fraction is called the numerator. 2 4 the bottom number

Fractions - . fractions. here is a whole square there are everyday objects which are whole. for example, we can have a

Fractions - . fractions. numbers such as ½ and -¾ are called fractions . the number above the fraction line is

FRACTIONS - . math 7. simplifying. to simplify a fraction means to reduce it to lowest terms in other words, divide out