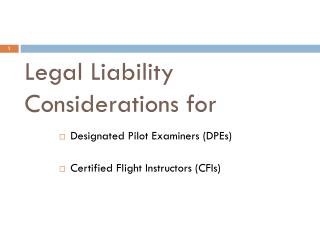 Legal Liability Considerations for. Designated Pilot Examiners (DPEs) Certified Flight Instructors (CFIs). Topics to Be Covered. Legal Considerations GARA Missouri Tort Reform Statutes of Limitations Elements of a Cause of Action (what the plaintiff has to show) Cases Involving DPEs Legal Issues for an Aging HIV Population - . presented by legal action center. who is your trainer?. sally friedman, esq.

Rule 10b-5 Antifraud Liability - . private rights of action. rule 10b-5 antifraud liability. elements of the cause of

Tips and Traps - . some important considerations …. this material is for information purposes only and should not be

Resources for Legal Clinics - . begin. this 30-question exercise on online legal resources is designed for those who wish

Bate and Switch - What you thought you were getting…. what you got…. bate and switch. legal liability of design and