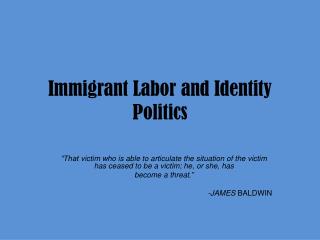 Immigrant Labor and Identity Politics . “That victim who is able to articulate the situation o f the victim has ceased to be a v ictim ; he, or she, has become a threat .” -JAMES BALDWIN. Background . Immigrant Children and Child Labor - . the immigrant experience in the early 1900s. why do people move? why did people

Labor, Socialism &amp; Politics to WWI - . i. methods of reform. majority of workers in late 19 th c. were wage

Labor, Socialism &amp; Politics to WWI - . i. methods of reform. majority of workers in late 19 th c. were wage

Identity Politics in the Public Realm - . identity politics. groups are politicized on the basis of gender, ethnicity,

ETHNICITY, LABOR AND POLITICS: The Filipino Experience in Hawaii - . belinda a. aquino, ph.d. center for philippine

Employment-Based Visas: Immigrant and Non-Immigrant - Http://www.shusterman.com this presentation discusses how you can

Free Labor Ideology and the Politics of the Mexican War - . the long march to civil war begins. previous conflict over