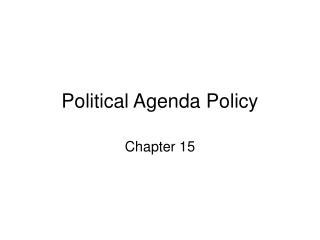 Political Agenda Policy. Chapter 15. Setting the Political Agenda. - What gets into the political realm to later become a policy? A. What belongs on the Agenda? 1. Shared beliefs of the people 2. Major impact of events Introduction to Moral Reasoning and Ethics - . kristene unsworth thanks to adam moore for slides. connections between

Mohammed and Political Islam -- Is It Something We Should Worry About? - . prepared by lyle b. mccurdy, ph.d. (rev. 3)

A Guided Tour on research in Health Economics and its relevance for the Health Policy Agenda - . prof. guillem