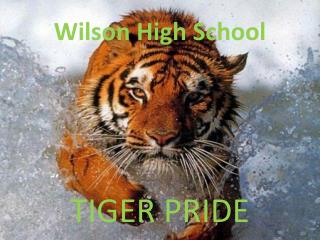 Wilson High School. TIGER PRIDE. 2013-2014 School Year Woodrow Wilson High School. Our Orientation Assembly. Word of the Day. Tenacity - ( te ‘ nac I ty ) (noun ) - firmness in holding fast, of sticking with something until it is mastered Wilson School Volunteer Program - . training sept. 27, 2012. welcome!. as you enter, please sign in pick up a packet and

Welcome Class of 2018 Wilson High School The Model Urban High School in the United States - . you are now wilson

High School - . what is it and how to make the most of it. shelly landry lead counselor, minneapolis public schools april

HIGH SCHOOL - . made by: asma hassan