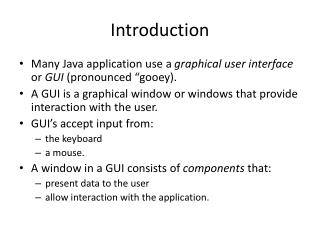 Introduction. Many Java application use a graphical user interface or GUI (pronounced “gooey). A GUI is a graphical window or windows that provide interaction with the user. GUI’s accept input from: the keyboard a mouse. A window in a GUI consists of components that:

Introduction - . introduction. o. farming was used during old centuries. development of o. f. started at the begin of

Introduction to ActiveMQ - . prepared for the austin java users group by gerald cantor. introduction activemq and

Introduction to Investment - . bruce viney director of training and client services. why we are here…. exam (syllabus