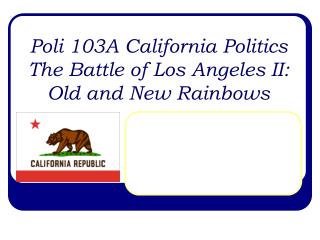 Poli 103A California Politics The Battle of Los Angeles II: Old and New Rainbows. Rainbows and the Politics of Race. Tom Bradley’s Rainbow The End of the Rainbow The Riots and Their Backlash Rainbows within Rainbows New Immigrant Coalitions.

Into Battle - Canada enters ww1. into battle. battle of ypres. 6,035 canadians died in two days. by february 1915 the

Battle Drills - Break contact. react to ambush. battle drills. react to contact. knock out a bunker. enter a building and

The Politics of the Internet – Week Five Overview - How is the internet affecting domestic politics? traditional

Green Politics - PSC 101 - Lesson objectives to illustrate the origins of the green movement in us politics. to identify