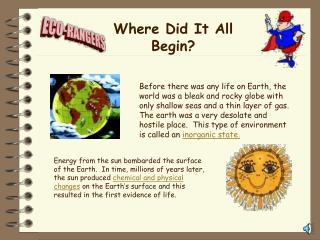 Where Did It All Begin?. Before there was any life on Earth, the world was a bleak and rocky globe with only shallow seas and a thin layer of gas. The earth was a very desolate and hostile place. This type of environment is called an inorganic state. Where Did It All Begin? - Before there was any life on earth, the world was a bleak and rocky globe with only shallow

Why did Détente begin and why did it fail to last? - Sam ibh2 european history november 10, 2010. why did détente begin

Egypt Where it all began - . the egyptian geotechnical society &amp; the government of egypt are pleased to invite

Where it All Comes Together

INTRODUCTION TO AGRICULTURE: What is it and where did it begin? - . ap human geography agriculture and land use copeland

Where is it all Going? - . dennis m. bushnell chief scientist nasa langley research center. overall : an attempt to

Where it all began - . a feature on marian de forest buffalo, new york, usa. special thanks to vivian cody , member of

Where does it all happen? - . to kill a mockingbird.

Where to Begin - . william stafford. a course in creative writing they want a wilderness with a map but how about errors

WHERE IT ALL BEGINS - . column grids backbone of all the documents, especially the floor plans alpha characters

Where to begin… - . start with needed conversations build on past preparation and address most pressing needs. start

Where it all started - . a family historian reports the first reference to a grubaugh was michael, in 18 th century