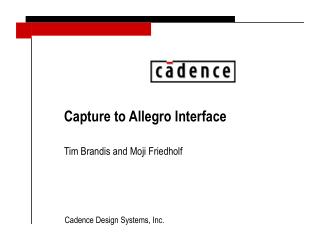 Capture to Allegro Interface. Tim Brandis and Moji Friedholf. What is the Capture to Allegro interface?. Before the 9.2.1 release, Capture used the third party interface to create a netlist, a unused pin list, and many device files. Allegro - Install an. allegro. central vacuum system. in your new home at leloko. experience the

Allegro Basics - . game library. what is allegro?. allegro is a cross-platform library intended for use in computer games