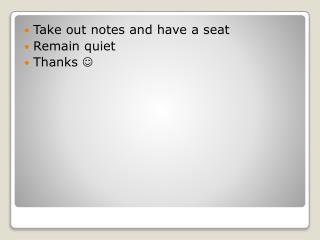 Take out notes and have a seat Remain quiet Thanks  . Ancient India . The first civilizations in ancient India emerged in the Indus River Valley, which flows across the northwest edge of the Indian subcontinent. A subcontinent is a large landmass that is part of a continent. Right now… - . sign up for your unit 0 packet at the supply center. if the line is too long, simply sit at your seat

What Title I Requirements Remain in the Land of the Waiver Initiative? - . leigh m. manasevit, esq. fall forum 2012

Instructions - . click on “view” and then “notes page” to view the syllabus and additional notes. when printing,

In a world dominated by smarter and smarter gadgets, one of the dumbest machines on earth is making a quiet comeback.

All Quiet on the Western Front - . test review for english 10. multiple choice. the setting for the novel all quiet on

“ Each one should remain in the condition in which he was called. ” (1Cor 7:20) - . evaluating contextualization and