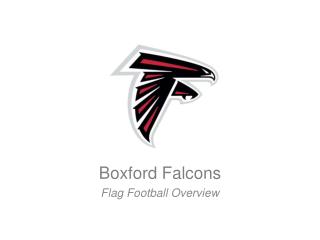 Super Bowl LI: Falcons vs Patriots - The atlanta falcons take on the new england patriots in

The Origins of Football - . sepp blatter, president of fifa. “we honor the chinese people for their country’s role as

Grassroots Soccer - . all football which is non-professional and non-elite is defined as grassroots (all children’s

Upward Flag Football Coach Training Conference - . what we will cover at this training. primary responsibilities of an