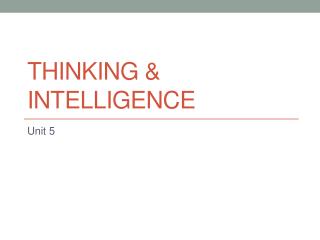 Thinking & Intelligence. Unit 5. Thinking and Intelligence. GerdGigerenzer has written about fears that he calls dread risks Dread risks can result when events with dire consequences receive a lot of publicity, even when the publicized events have a low probability of recurring Critical Thinking - . the ultimate key success factor. agenda. what is critical thinking? how does the brain work? what