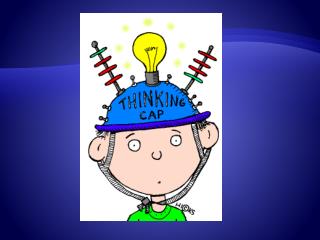 one just doesn’t learn in the first place. Thinking. “There is no such thing as forgetting”. How do you study thinking?. Problem solving. Get out a scratch piece of paper and draw nine dots, you mission is to connect all the dots with 4 straight lines and you may not lift your pen. For each thing: For each and every thing in the universe: For all things: For anything: - Important note. all references

Is A Little Learning Such A Dangerous Thing? - . sharing a vision conference springfield, il 1 october 2003. the

scssconsulting - Www.scssconsulting.org. grandma masse’s rules for success: “the smart guys are the guys who learn

Welcome to Humanities B - . 1950-present. i can explain policies &amp; procedures for arts humanities b. find your

One Thing Remains - . higher than the mountains that i face stronger than the power of the grave constant through the

Do Now - . take a notecard from the front table. on one side, write one thing you know about the american revolution and

5 – Forgetting Demo: On a penny, what appears to the left of Lincoln? To the right? - We forget almost

Doing the Right Thing: Introduction and Lessons in Ethics and Leadership from Enron and Worldcom - . mgt 5531, class 1

“SOLVITUR AMBULANDO” St Augustine c 400AD - . walking is the first thing an infant wants to do and the last thing an

Arts Education Learning Project Day - . november 27, 2012. the earth without art is just eh. one thing i want out of

Every Thing You Should Know About Linux - . prabhaker mateti department of computer science and engineering wright state