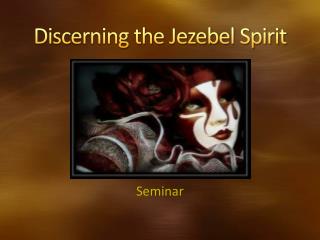 DISCERNING THE SPIRIT WITHIN THE CHURCH - . jesus warned of false prophets who would perform &quot;great signs and

Discerning the Context - . education ipb (intelligence preparation of the

Delilah and Jezebel - . delilah and jezebel. two names that should strike fear into anyone who hears them. the reputation

Ahab &amp; Jezebel - . desperate marriages. 1 kings 21:25 (nlt). no one else so completely sold himself to what was

Discerning Love - . chapter 21. conscience. the nobler person deep inside each of us our “inner voice” read bubba

Discerning Influences - . meteorology: explore the affect of meteorological conditions on pm concentrations and

DISCERNING THE SIGNS OF THE TIMES - . jesus spoke about

The spirit - . note by c. leger: student example of powerpoint presentation. once upon a time there was a girl who lived

The Spirit - . i believe in the holy spirit. basic theology, part 6. pneumatology: the study of the spirit. biblical

“Discerning the Voice” Concert of Prayer - . general assembly 2012. a call to repentance. gather in groups of 4-5…

The Holy Spirit The holy spirit is the spirit of God