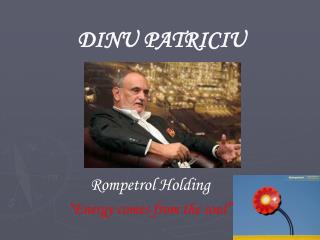 DINU PATRICIU. Rompetrol Holding. “Energy comes from the soul”. Quick Factfile. Roumanian politician,businessman He is one of the richest Romanians his wealth can be estimated at 300-350 million dollars He took the lead of Rompetrol in 1998