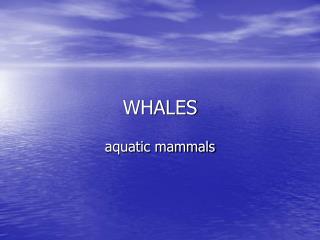 WHALES. aquatic mammals. Whales and dolphins are cetaceans from the Greek word ‘ ketos’ or whale. They originated as land mammals, but evolved from the land to the sea about 50-60 million years ago. WHALES - . by: kyle l asaga. habitat:. live in the sea the sea has seaweed ,fish , crabs, and kelp. description:. whales

Whales - . antonina lillis. they travel in groups. several whales are in each group they all swim together. whales diet.

WHALES - . created by grace . whales migrate because there cold water areas freeze over. a bowe headed whale can grow

Whales - . whales are endangered because p eople hunted whales for their

Whales - . by: abbie bokinskie. summary of the

Whales - . by: cheyanne ward. what whales look like. there are many kinds of whales but my favorite is the blue whale. it

whales - . heck yeah. whale singing! =d (communication). whale songs are a series of different themes given in a

Whales - . by: jenny tran. blue whale. the blue whale is the largest living animal. it is an endangered species, and can

Whales - . by:. maria delgado. who can be called a whale? . distinguish the different types of whales illustrate the

Whales! - . whales eat fish planktons krill and squid and some killer whales are

Whales - . do orca die from sting-ray?. i couldn’t find it out but i found out that they flip sting-ray onto there back

Whales - . by heather buchholz. whales as baby's. baby whales stay with there mother for months unusually for 3,4,5,6

Whales - . kadence dotson mark surber. babies. a baby whale is called a calf. some calves are thirteen feet long when