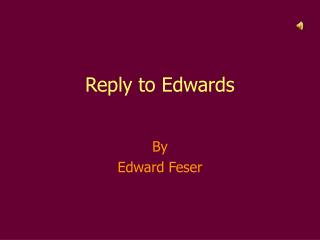 Reply to Edwards. By Edward Feser. Response to “Public Goods” Theory. According to Feser, Edwards does not really come to terms with the public goods problem . Even if there are such things as public goods, that fact does NOT morally justify using taxation to fund such goods . How to reply Thank you and Thanks - Text used. almost all of the movie scripts in judy sensei's files.. items examined.

Jonathan Edwards - . “sinners in the hands of an angry god”. edwards’ religious philosophy. edwards was part of a

“The Nymph’s Reply to the Shepherd” - . page 231. vocabulary. invigorate- energize immortal- not subject to death

Jonathan Edwards - . (1703-1758). background information. important role in the shaping of the great awakening (

The Nymph’s Reply to the Shepherd - . by: sir w alter r aleigh vivian h ett and courtney fischer. if all the world and