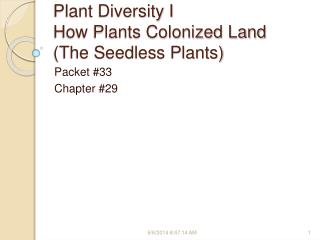 Plant Diversity I How Plants Colonized Land (The Seedless Plants). Packet #33 Chapter #29. Introduction. There are more than 290,000 species of plants that inhabit the earth. How, and why, based on the theory of evolution, did plants venture out of the sea and onto dry land? Charophyceans IMPORTANCE OF PLANTS - . prepared by mpl. p lants. plants take in carbon di oxide and leave out oxygen during the day. we