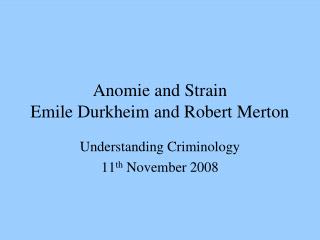 Emile Durkheim - . durkheim’s analysis of the process of social change involved in industrialization is presented in

Emile Durkheim - . 1. structure: society beyond ourselves. society is more than the individuals who compose it. norms,

EMILE DURKHEIM - . counterargument versus marx. theory of man. influenced by darwin’s “survival of the fittest ”

Strain/Anomie Theory - . what do you do when bad things happen?. a parent abuses you you fail a test you studied for your