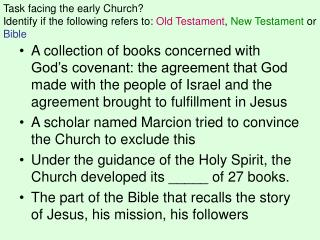 Task facing the early Church? Identify if the following refers to: Old Testament , New Testament or Bible. A collection of books concerned with God’s covenant: the agreement that God made with the people of Israel and the agreement brought to fulfillment in Jesus