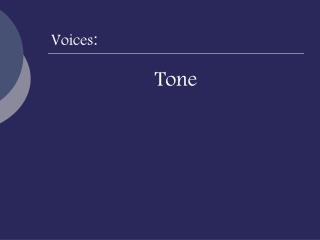 Voices :. Tone. Tone-1. Consider: It’s true. If you want to buy a spring suit, the choice selection occurs in February: a bathing suit, March: back to school clothes, July: a fur coat, August. Did I tell you about the week I gave in to a Mad-Mitty desire to buy a bathing suit in August? A Gathering of Voices - . literature of early america. snapshot of the period. what is the relationship between