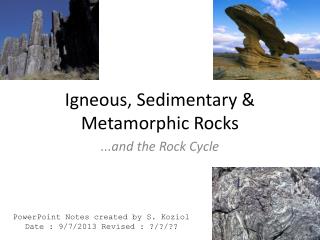 Rocks - . a rock is a group of minerals bound together in some way. rocks are divided into three groups based on how the

Metamorphism and Metamorphic Rocks - . a. metamorphic rocks: form at conditions between igneous and sedimentary rocks.

Metamorphic Rocks - . mr. ahearn earth science 2010. what are metamorphic rocks?. form at conditions between those that

Types of Rocks - . geologists place rocks into three groups according to how they form: igneous, sedimentary and

Rocks - . rocks are defined as a mixture of one or more minerals and organic matter there are three types of rocks:

Sedimentary Rocks - . ii. rocks. solid forms of matter that are created in nature that are made of one or more minerals.

METAMORPHIC ROCKS - Rocks that form from other pre-existing rock (sedimentary, igneous, or metamorphic) that have been