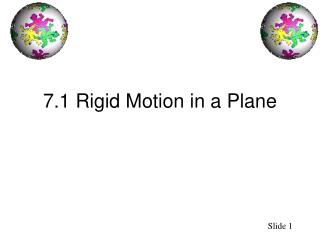 7.1 Rigid Motion in a Plane. Objectives/Assignment. Identify the three basic rigid transformations Assignment: 2-38 even. Identifying Transformations. Figures in a plane can be Reflected Rotated Translated To produce new figures. The new figures is called the IMAGE . Chapter 11 Areas of Plane Figures - . understand what is meant by the area of a polygon. know and use the formulas for