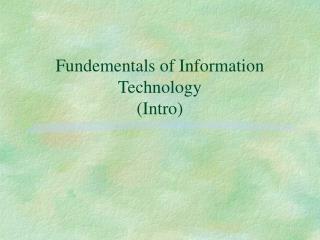 Fundementals of Information Technology (Intro). What is Information???. Opinion Science Knowledge. Going to the cinema;. Hours Tranportation Costs Films Possible Seats????. How can we learn them?. Newspapers Magazines Asking to someone else Internet Phone …..etc.

Intro to the Renaissance - . top ten reasons to study…. intro to the renaissance. use your notes from the middle ages

GOOD MORNING! - . the world is moving fast, and tall too, in any &amp; every sphere of life. information technology