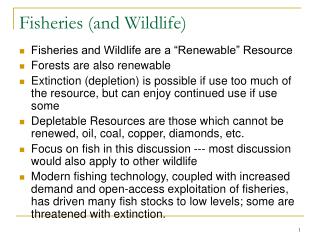 Fisheries (and Wildlife). Fisheries and Wildlife are a “Renewable” Resource Forests are also renewable Extinction (depletion) is possible if use too much of the resource, but can enjoy continued use if use some Discussion of Fisheries and Diversions - . bren haase planning and research division april 16, 2014. committed to our

Principles of Wildlife &amp; Fisheries Management - . the basics. discussion based on concepts outlined in the

What is Fisheries Science? - . eric hallerman, head, dept. of fisheries &amp; wildlife sciences. what is fisheries

Wildlife and Fisheries: A Commons to Trust - . ross saxton. the lack of a commons management agency (cma)…. anyone

Emily Rinaldi Wildlife &amp; Fisheries Biology Spring 2013 - The syncretism of utilizing the world, its resources and