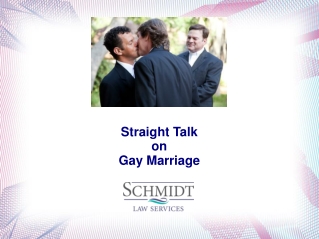 Straight Talk on Gay Marriage. What Do We Mean By Marriage?. The legal union of a couple as husband and wife - Black's Law Dictionary 8 th Edition Declared a “fundamental right” by the Supreme Court as early as 1888. - Maynard v. Hill , 125 US 190. Straight Talk on Gay Rights - The regression which we see today in society is overwhelming and an issue of grave concern.

Gay-Straight Alliances - . by: danielle reisenauer morgan reddig. what is gsa?. started in 1988 student clubs to improve

Gay Marriage - . by: valerie wirtschafter raquel rosenberg. the defense of marriage act of 1996. it provides that no

Straight Talk on Students' Rights - . who are we talking about?. pre-k through 12 th grade college students have more

Anti- Gay Marriage - . by lama wehbi. introduction . gay marriage is frowned upon by many, and if it is not regulated, it

Straight Talk on Gun Control Laws - . 2 nd amendment. a well regulated militia, being necessary to the security of a free