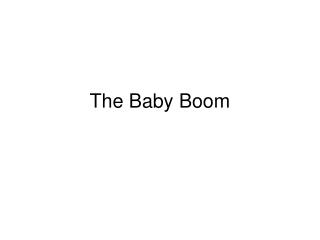 Education and the ‘Baby Boom’ in Northern Ireland - . patrick mcgregor patricia mckee. attesting to the

Baby Boom Children: The World They Were Born Into - . hsb4u chapter 5 day 2. chapter inquiry question. how has the

Boom Boom - . clapton did this but the original by john lee hooker. words. this is what we are aiming for. whole thing

BOOM BOOM AFRIDI - . come on lala do it once again raja ayaz cricket

The Postwar Boom - . chapter 19. the postwar boom. postwar america the american dream in the fifties popular culture the

THE POSTWAR BOOM - . the american dream in the 1950s. section 1: postwar america. after wwii, returning vets faced a

THE POSTWAR BOOM - . the american dream in the 1950s. chapter 19.1 essential questions. what economic and social