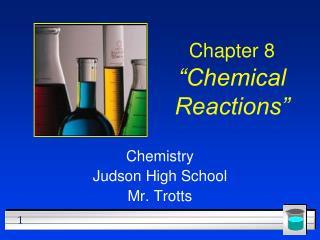 Cpt 4. CHEMICAL STOICHIOMETRY - . definition : study of proportions of * atoms inside substances ; * substances in

Chemical Equilibrium - . the nature of chemical equilibrium. reversible reactions. in theory, every reaction can continue

Chapter 20 Oxidation-Reduction Reactions - . some common reactions. the combustion of gasoline in an automobile engine

Chemical Kinetics - . kinetics. chemical kinetics is the branch of chemistry concerned with the rate of chemical

Chapter 4 Alcohols and Alkyl Halides - . overview of chapter. this chapter introduces chemical reactions and their