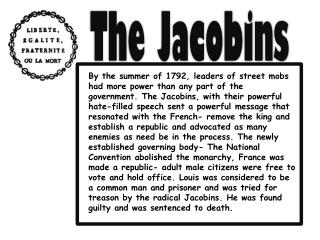 The Jacobins - . founders of the republic of virtue; instigators of the terror. founded in 1789 by the deputies from

The National Convention and The Jacobins - . by colin hurrey. the national convention. established as a replacement for

The virgin, the villain, the hero, the whore - . evaluation. target

The Recognition The Shame The Desire The Resolve - . repentance ( thayer definitions) - there are three greek words used

THE GOSSIPER THE SLANDERER THE BUSYBODY THE WHISPERER - . “whoever guards his mouth and tongue keeps his soul

The Bass, the River, the Review - . you need to know these by tomorrow!. vocabulary. study your vocabulary words!!! learn

The ‘Fate’ of the The Anasazi - . anasazi native americans. the anasazi (&quot;ancient ones&quot;), thought

The Prologue to The Canterbury Tales The Knight The Squire The Yeoman The Prioress - . by geoffrey chaucer 1340?-1400.