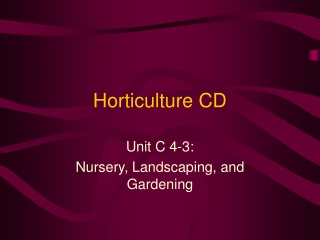 Horticulture CD. Unit C 4-3: Nursery, Landscaping, and Gardening. Problem Area 4: Landscape Maintenance. Lesson 3: Pruning Landscape Plants. Have You Ever Seen a Tree Branch That is Split From Becoming Too Long, or a Shrub That Has Grown out Into a Walkway?. Learning Objectives.

Horticulture - . introduction and careers . what is horticulture? . definition the science and art of cultivating fruits,

Horticulture - . unit 1 to obtain an overview of the horticulture industry and jobs available in the field so that a