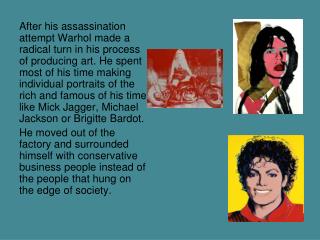 After his assassination attempt Warhol made a radical turn in his process of producing art. He spent most of his time making individual portraits of the rich and famous of his time like Mick Jagger, Michael Jackson or Brigitte Bardot. Career Workshop: how to own an interview? - . march 2011. presented by: phi sigma pi national honor fraternity. a genda.

Andy Warhol - . andy warhol is famous for his pictures of superstars, but he painted bottles and cans too. andy warhole

Pop Art - “everything is beautiful. pop is everything.” -andy warhol. pop art . by: jennifer sika. 1. beginnings.

Entrepreneurial Interview - . brandon mathie ent 200. who?. someone who has had many experiences as an entrepreneur

How to fish ADD Style - . caught downtown salem, oregon. the yearbook picture that started it all. world famous party